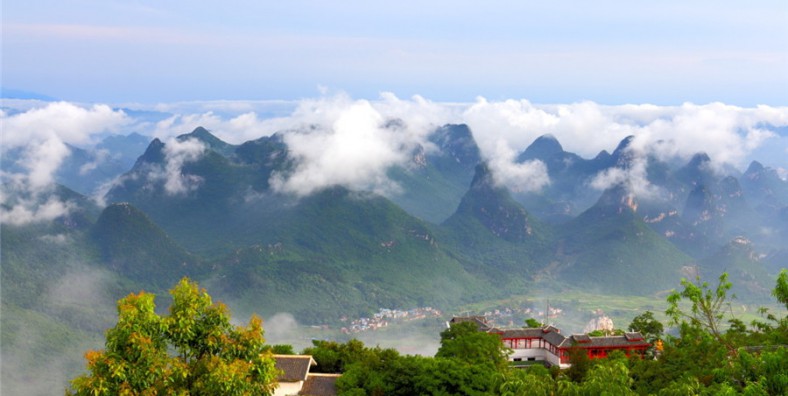 The scenic area boasts diverse karst landscapes, the world's largest natural image of a recumbent Buddha, and also many historical relics like: ancient temples, and the Mausoleums of Jingjiang Princes.

Why is Yao Mountain So Special?

Yao Mountain, also known as Yaoshan Hill or Yaoshan Mountain, is the highest mountain of Guilin, with the main peak reaching an altitude of 909.3 meters (2,983 feet). Lying 10 kilometers (6 miles) northeast of the city center, it is a wonderful site to have a bird’s-eye view of beautiful Guilin City, embraced by the winding Li River. The scenic area boasts diverse karst landscapes, the world’s largest natural image of a recumbent Buddha, and also many historical relics like: ancient temples, and the Mausoleums of Jingjiang Princes.

Where is Yao Mountain

Situated 10 kilometers (6 miles) northeast of the city center, it has a bird’s eye view of the beautiful city of Guilin and is surrounded by the winding Lijiang River. It is an excellent place. The scenic spot has various karst landscapes, the world’s largest reclining Buddha natural image, and many historical relics.

It takes about an hour to climb Yaoshan. Cable cars and slideways can make your trip to Yaoshan easier and give you a special experience. Taking the cable car up the mountain can save half an hour. Sitting in the cabin, passengers can see a panoramic view of Guilin.

Different scenery in the four seasons gives Yaoshan different charm. In spring, it becomes an ocean of azalea flowers, and the air is filled with strong fragrance. Summer has arrived and forests have flourished, turning the mountain into a vast green world. Maple leaves turn red and wild chrysanthemum flowers are everywhere in the fields in autumn. Once it snows, everything is covered with beautiful white masks, making Yaoshan look like a fairyland. The most wonderful scenery is that from the top of the mountain, the opposite mountain looks like a Buddha lying in the clouds. This incredible scene has attracted numerous tourists from home and abroad.

Named after Yao Temple built in the Qin Dynasty (221-207 BC), the mountain is 450 meters (1476 feet) high on the western slope. Later, the temple collapsed, and then Shoufo Temple and Baiyun Taoist Temple were built in the same place. At that time they were very prosperous. The first Buddhist temple was built in the Ming Dynasty and was renovated in the Qing Dynasty (1644-1911). It has three compartments, with a main temple in the middle, two side halls and a stone arch. This is a place to worship the eternal Buddha. Now, only ruins remain.

At a height of about 700 meters (2297 feet), you can see a monastery called Bailu. This is the former residence of Tang Dynasty monk Master Bailu.

Located at the foot of Yaoshan Mountain, the Jingjiang Mausoleum enjoys the same popularity as the Ming Tombs in Beijing. It is a royal cemetery where eleven princes of the Jingjiang family were buried in the Ming Dynasty. The Jingjiang family consists of descendants of King Jingjiang, the nephew of Emperor Amin. More than 300 graves are distributed in a range of 100 square kilometers (39 square miles). A tomb open to the public is the tomb of the third king and his spouse. Unearthed items include gold, silver, jade, pottery, porcelain and other antiques. One of them is a precious and elegant porcelain vase.