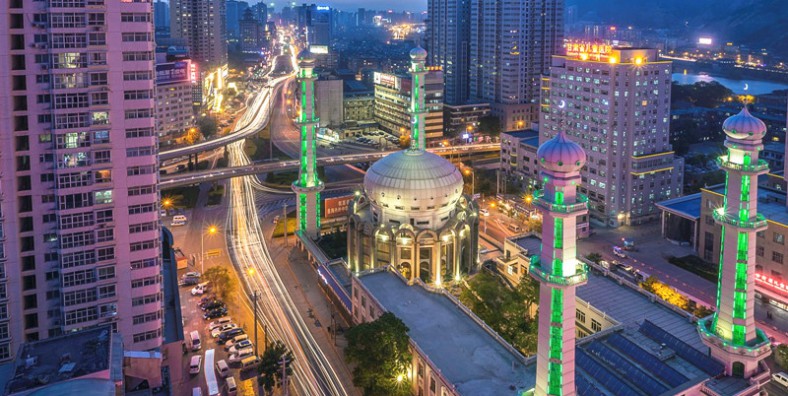 It is a domical architecture of Arabic Islam style, solemn and forceful, which is one of the most grand masques in China.It also has held religious schools, which has trained many Muslim scholars and has made great contribution to the development of Islamic education and culture.

Where is Xiguan Mosque?

Lanzhou Xiguan Mosque, also known as West Cross Mosque Lanzhou, is a major mosque in Lanzhou. The Xiguan Mosque was first built in Wanli Period, Ming Dynasty(1368-1644). The existing constructions were rebuilt in 1990). The temple covers an area of 467 square meters. The temple keeps 50 volume of lection. There are one imam, ten Manlas, three Xuedong in the temple.

The mosque include the gate, prayer hall, Bunker building, Shengxin Pavilion, bathroom, learning house and other facilities. The main hall is the most prominent building in Xiguan Mosque, covering an area of 141 square meters. It is a four-storeyed prayer hall with the total height of 37 meters and each storey with the height of 3.9 meters. Imam room, teaching house, dormitory, storage room, bathroom and scripture chamber are all seated in the main hall.

Why is Xiguan Mosque So Special？

It is a domical architecture of Arabic Islam style, solemn and forceful, which is one of the most grand masques in China. Xiguan Mosque is not only an important place for local Lanzhou Muslims to do prayers and attend religious activities. It also has held religious schools, which has trained many Muslim scholars and has made great contribution to the development of Islamic education and culture. It receives thousands of Muslims every year to do prayer there.

How to get to Lanzhou Xiguan Mosque

If you want to get out of the traffic and hassle of navigation, you can book a private tour package that includes visiting, dining and transfer from us. Our local guide and driver will escort you to the Lanzhou Xiguan Mosque and most convenient way and take care of all the details. You just have to focus on the visiting.

Nearby Attractions in Lanzhou

One thought on “Xiguan Mosque in Lanzhou”