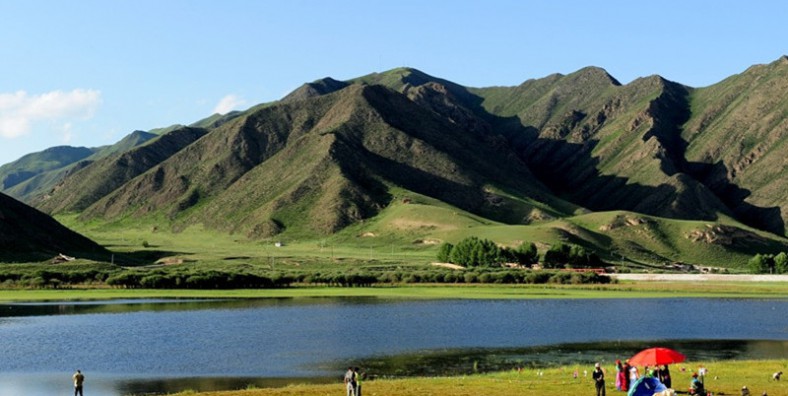 Best Time to Visit: August of each year

Sangke grassland is located in Xiahe, Gannan Tibetan Autonomous Prefecture, Gansu Province, 18 kilometers southwest of Labrang, Xiahe County, with direct highway. Sangke grassland belongs to meadow grassland, with an average altitude of over 3000 meters and an area of 70 square kilometers. It is one of the main animal husbandry bases in Gannan Tibetan Autonomous Prefecture. It has a small population and a large area, with only 4000 herdsmen. However, the grassland is vast and boundless. It is an extremely valuable natural tourist attraction.

Labrang temple is located in Sangke grassland, one kilometer west of Xiahe County, Gansu Province. It was formerly known as zhaxiqi temple. It is one of the six famous temples of Gelu sect of Tibetan Buddhism in China. It used to be the political, religious and cultural center of the Tibetans in the adjacent areas of Gansu, Qinghai and Sichuan. “Labrang” is the transliteration of Tibetan, which means the place where the Buddhist palace is located. Labrang temple covers an area of 8.2 hectares, with a building area of 823000 square meters. It was built in the 48th year of Kangxi (1709). The main buildings include Wensiyuan, Jingta, Shenjing altar, Tibetan Scripture building, Yinjing academy, etc.

Xianglang Festival is a traditional festival for Tibetan on the Sangke grassland in Gannan. Xianglang can be translated into “collecting firewood” in Tibetan. Around June 15 of the lunar calendar, it is the golden season in Tibet. The meat on the pasture is fragrant and the milk is sweet. People travel all over the country to the beautiful prairie, set up tents and live a relaxed and comfortable life for ten and a half days. This kind of attractive activity, which is embraced by nature, even the monks in the temple are envious. They want to play with the masses of laymen for a few days. As time goes by, it has formed today’s xianglang Festival. There are also festivals and rituals in the traditional xianglang Festival.

If you want to get rid of hustle of public transportation and troublesome navigation, you can book a private tour package which covers sightseeing dining and transfer from us. Our local tour guide and driver will escort you to Sangke Grassland with speed and convenience, and take care of all the details. You just need to focus on sightseeing.

1. After visiting Labrang temple, take a 15 minute bus to get there;

2. Rent bicycle from Xiahe to Sangke grassland, 10 yuan a day;

3. Take a bus from Lanzhou to Xiahe for 75 yuan, and then take a taxi to Sangke grassland for 25 yuan.

● In addition to obtaining permission on the grassland, do not enter the area surrounded by barbed wire without permission. It is a private grassland. After entering, someone will come to ask for money.

● The benefits of mujiale on the grassland are different. Please ask if you want to charge and the price before you go to the bonfire party, Guozhuang and other activities, meals and accommodation.

● Sangke grassland is suitable for summer. In other seasons, the grassland is dry and yellow and the climate is very cold. It is not recommended to go there.

●You can experience the traditional Tibetan folk customs and life, such as horse riding, tsamba kneading, and butter tea drinking.

Nearby Attractions in Gannan