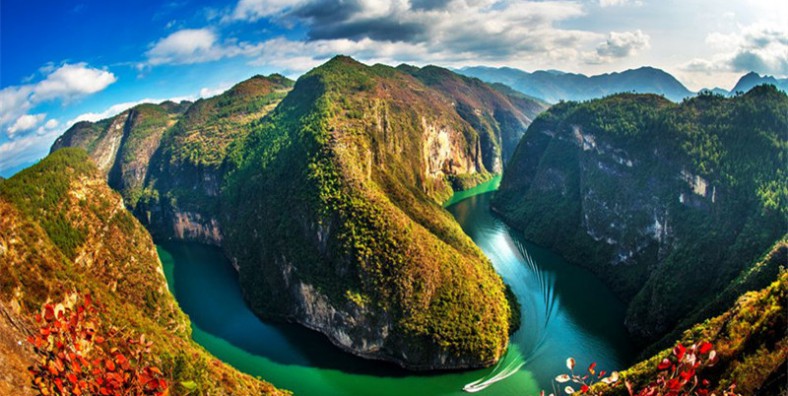 The Three Gorges are three adjacent gorges along the middle reaches of the Yangtze River, in the hinterland of the People's Republic of China. The "Three Gorges Scenic Area" is classified as a AAAAA scenic area by the China National Tourism Administration.

The Three Gorges are three adjacent gorges along the middle reaches of the Yangtze River, in the hinterland of the People’s Republic of China. The Three Gorges—comprising the Qutang, Wu, and Xiling gorges—span 193 miles, beginning at Baidi City of Chongqing Municipality, in the west and ending at Nanjing Pass, at Yichang City, Hubei Province, in the east, between which are the Fengjie and Wu Mountains of Chongqing, as well as Badong, Zigui, and Yichang of Hubei Province. The “Three Gorges Scenic Area” is classified as a AAAAA scenic area by the China National Tourism Administration.

Main Attractions of Three Gorges of the Yangtze River

Wu Gorge, sometimes called Great Gorge, is the second gorge of the Three Gorges system on the Yangtze River. The gorge straddles the boundary between Wushan County of Chongqing Municipality and Badong County, Hubei Province. Formed by the Wu River, it stretches 45 km from Wushan to Guandukou, and is located downstream of Qutang Gorge and upstream of Xiling Gorge.

Xiling Gorge is a gorge on the Yangtze River in Hubei province, China. It is the largest and most downstream—eastern of the famous Three Gorges. Xiling, which forms nearly half the length of the entire Three Gorges region, is actually a series of four different gorges: Precious Sword; Horse Lung & Ox Liver; Soundless Bell; and Shadow Play Gorges.

What to Do in Three Gorges of the Yangtze River

You can enjoy beautiful gallery of picturesque landscape of high mountains and flat river and the renowned Three Gorges Dam in the world; visit ancient historical culture relics, like Fengdu Ghost City, White Emperor City, Shibaozhai Pagoda, etc; find the traces of Hanging coffins on the mountain cliffs; hear the legendary story of the soaring peaks.

Periods of spring, autumn and winter are the best. In spring from about March to May, you can appreciate the pinky peach blossoms on the banks in the warm sunshine. In autumn from about September to November, the fresh fruits and the golden autumn leaves dress up the mountains into the beauty. And in winter from around December to February, the fiery red leaves spreading the continuous hills make it the best time for photographing. And in summer from around June to August, plants and trees at the Three Gorges are flourish, which provides a cool retreat from the heat.

More Attractions of the Yangtze River