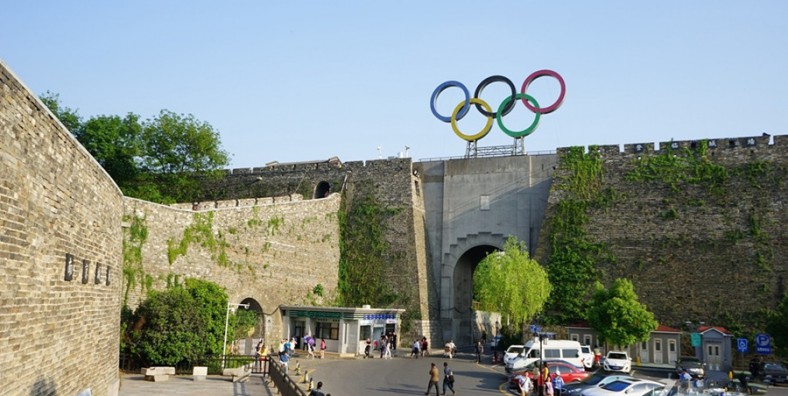 Nanjing Ming City Wall was built in the Ming Dynasty more than 600 years ago. It is well preserved and is the best preserved and longest city wall in the world.

The City Wall of Nanjing (南京城墙) was designed by Emperor Zhu Yuanzhang(朱元璋) after he founded the Ming Dynasty (1368–1644) and established Nanjing as the capital 600 years ago. To consolidate his sovereignty and keep out invaders, he adopted the suggestions of advisor Zhu Sheng(朱升) to build a higher city wall, to collect grains and to postpone the coronation(高筑墙,广积粮,缓称王). Then, he started to build the city wall. It took 21 years to complete, and used 200,000 laborers to move 7 million cubic metres of earth. The City Wall of Nanjing was among the largest city walls ever constructed in China. The enclosed Nanjing City is about 55 square kilometers.

The longest City Wall in the World

The Harmony Between Man and Nature

Nanjing City was located at the foot of a mountain-Zijin Mountain. According to the layout of the mountains and rivers in Nanjing, the city walls are irregular, different from the traditional suqare city walls. The shape of Ming City Wall is irregular polygon, it is gourd shape. Nanjing city walls made good use of the environment as the natural defense, such as the Zijin Mountain in the east, Xuanwu Lake in the north and Qinhuai River in the south.

Different from ancient city walls in Beijing and Xi’an, the design and construction of Nanjing City Wall was unique and changed the old ways of equilibrium and symmetry. The construction concentrated on military defense because the city was at the foot of a mountain—a natural barrier to control the commanding elevation with the river as its natural city moat. Because of this, Nanjing city became difficult to reach by enemies. The city wall adopted a winding, free style, based on the city’s complicated topography. Construction of the Beijing and the Xi’an city walls was in the ancient style of square or rectangular design.

First part: The Outer City (外郭), its length is over 60  kilometers in Ming Dynasty. However, it was rained in wars, what remains now is only the names of its 18 gates. What we can see today is the inner city(内城). The other two parts of the city walls are the Imperial City(皇城) and Palace City(宫城).  The Imperial City was built to protect the Palace City, which is nicknamed ‘Forbidden City’ as it is the center of the four walls.

Highlights of the Nanjing City Wall

Zhonghua Gate(中华门) is the largest and most complete one of the thirteen gates. Its original name was Jubao Gate(聚宝门), which was named after Jubao Mountain(聚宝山) in the south of the city. In 1931, it was renamed Zhonghua Gate because of the construction of Zhonghua Road(中华路). The three Chinese characters above this door are the handwriting Chiang Kai-shek.

Xuanwu Gate(玄武门), formerly known as Fengrun Gate(丰润门). In order to facilitate visitors from home and abroad to visit Xuanwu Lake, Qing government decided to open a gate on the city wall. And the governer of that project was Zhang Renjun(张人骏), Because he was born in Fengrun(丰润), Hebei Province(河北省), the gate was named Fengrun Gate. In 1928, Fengrun Gate was renamed to Xuanwu Gate, for its proximity to Xuanwu Lake and served as the west gate of Xuanwu Lake Park(玄武湖公园).

How to Get to Nanjing City Wall

If you want to get rid of hustle of transportation and troublesome navigation, you can book a private tour package which covers visiting, dining and transfer from us. Our local tour guide and driver will escort you to Nanjing City Wall with speed and convenience, and take care of all the details. You just need to focus on travel.

For Independent travelers, you can get there

The Bus No.2 in Nanjing city can get to Nanjing City Wall directly.

Take the Line 4, then transfer at Gulou Station(鼓楼站), take Line 1, get off at Sanshan Station(三山站), take the Exit 1, walk for about 1km to get to the Nanjiing city wall.

It will cost you about 26 CN￥ from Nanjing South Railway Station to Nanjiing City Wall.

Purple Mountain(紫金山) or Zijin Shan, Zhongshan Mountain, is located on the eastern side of Nanjing in Jiangsu province. Covered by verdant trees, the main peak of Purple Mountain is 448.9 meters above sea level. Its peaks are often found enveloped in mysterious purple and golden clouds at dawn and dusk, hence its name. It is a national 5A tourist scenic spots in Jiangsu, as well as a world cultural heritage. Priple Mountain is not noly full of baeutiful natural scenery but also rich in cultural.

Spring and autumn are the best seasons for traveling, it’s neither too cold nor too hot.