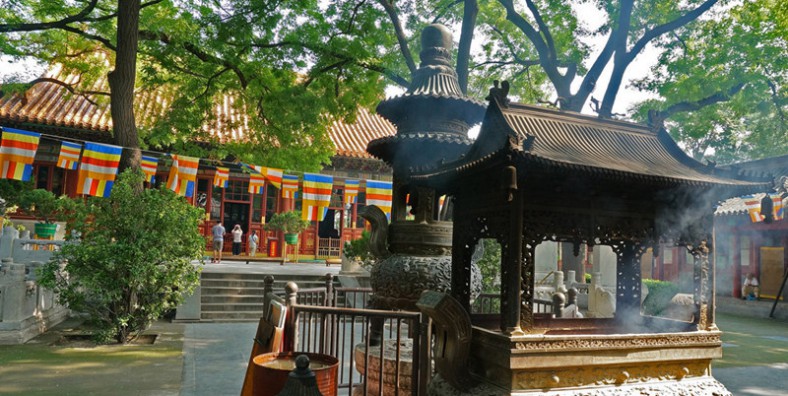 Why is Guangji Temple so special?

The building maintains the pattern of the Ming Dynasty and is divided into three roads. Many precious cultural relics are treasured in the temple, such as the statues of the Three Kingdoms Buddha and the Eighteen Arhats of the Ming Dynasty, the white marble platform built by Kangxi, and the bronze tripod of Ganlong.

Guangji temple was founded in the Jin dynasty (1115~1234). during the Republic of China, the temple was burned twice and rebuilt twice. In the early days of New China, the government allocated funds to restore all the temple buildings. In 1984, it was announced as a cultural relic protection unit in Beijing. On May 25, 2006, Guangji Temple, as an ancient building in Qing Dynasty, was approved by the State Council as the sixth batch of national key cultural relics protection units.

Guangji temple is dedicated to many Buddhist statues of Ming and Qing dynasties. there are also many precious Buddhist scriptures, steles and other cultural relics in the temple.

There is a bronze tripod cast in 1793 in Hall of Ceremony . It is more than 2 meters high and is placed on a carved stone base. Its body is decorated with eight Buddhist statues. Its shape is simple and elegant, and its workmanship is exquisite. It is a precious art treasure.

There is a picture hanging from the back wall of Hall of Ceremony . It was painted by Fu Wen, a famous painter, with his fingers in 1744. It is 5 meters high and 10 meters wide. In the picture, Sakyamuni was sitting on a lotus seat, explaining the scriptures to the believers, and more than 100 disciples around him listened attentively. Interestingly, among the audience were also Chinese historical figures such as Guan Yu.

The Buddhist classics collected in Guangji Temple are very numerous. The library alone contains 23 languages, more than 100,000 Buddhist classics and works, and the ” Tripitaka ” alone contains 12 versions. It is an important historical material for studying the occurrence, development and evolution of Chinese Buddhism and an important part of Chinese traditional culture.

Beihai Park, located in the center of Beijing City, is the oldest, best preserved and most culturally deposited classical royal garden in China’s existing history.