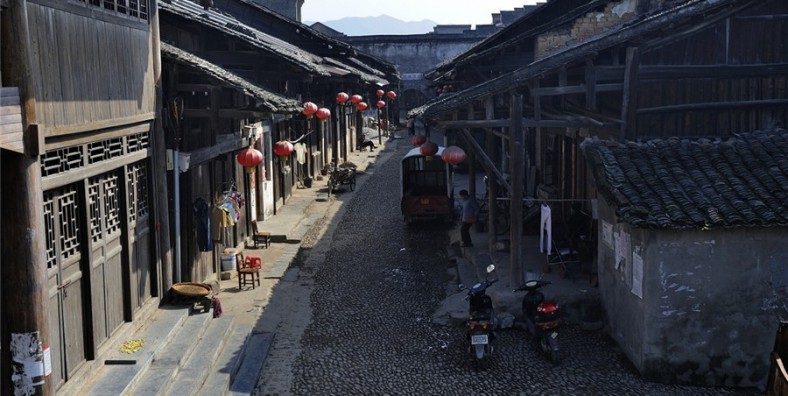 The ancient town of daxu was founded in 200 a.d. The old daxu street stretches for 2 kilometers along the Lijiang river. the narrow streets are covered with green slates. on both sides of the slates are well-preserved old houses.

Why is Daxu Ancient Town So Special?

The ancient town of Daxu was first built in the early Northern Song Dynasty (960-1127 A.D.), which means it has a history of more than 1,000 years. Due to convenient water transportation, it was a prosperous market town at that time. During the Republic of China (1911-1949), this town was in its heyday. There are eight broad commercial streets and more than a dozen docks. Businessmen gather in groups. In terms of scale, it is the best of the four ancient towns in Guangxi. Now, all the prosperity has disappeared, leaving this small town standing quietly by the Lijiang River.

Where is Daxu Ancient Town

The ancient town of daxu is located on the east bank of Lijiang river, southeast of father-son rock and north of millstone mountain, 23 kilometers from Guilin. According to historical records, the ancient town was founded in the early years of the Northern Song Dynasty, revived in the Ming and Qing Dynasties, and reached its peak in the Republic of China. It has a history of 1,000 years. As far back as 600 years ago, Dawei became the largest of the four largest towns in Guangxi due to its “size”.

History of the Daxu Ancient Town

The ancient town was founded in 200 AD.

The ancient town of Dawu was once called Chang ‘an City and Lutian City, commonly known as Dawu. Small residential areas have been formed in the Han Dynasty. In the Northern Song Dynasty, they were prosperous commercial market towns and were one of the four ancient towns in Guangxi in the Ming Dynasty. His business started in the Song Dynasty and he once set up a tax official. In the Ming Dynasty and the 31st year of the reign of Emperor Guangxu of the Qing Dynasty, Lingui County Annals was called “land and water wharf”. During the Anti-Japanese War, it was called “Small Guilin”. The number of people driving the fair was as high as 10,000, and as many as 200 or 300 boats were anchored. The local commercial culture had profound accumulation and distinctive characteristics.

During the Ming and Qing Dynasties, Dawei was already a place where merchants from the north and south gathered. Businesses of all kinds had everything. In the early Ming Dynasty, Jie Jin said in a poem, “Dawei River goes to Lutian Temple, with a hundred feet deep pool and ten thousand bamboos surrounding it. After the salary of the willow shop was raised in the morning, the servants wrapped their lotus leaves in salt. Businessmen from all over the world have built guild halls here, including famous guilds and mosques in Guangdong, Hunan and Jiangxi. By the beginning of the Republic of China, Dawei had formed eight streets, namely, Laowei Street, Diling Street, Long ‘an Street, Xinglong Street, Tangfang Street, Gulou Street, Siying Street and Jianshe Street. There are also more than a dozen berths along the Yangtze River. There is a saying that “a boat sailing against the water goes up to Guilin, while a sail falls down to Guangzhou”. Shop front firms are called “four masters”, “eight middle schools” and “twenty-four small families”. This reflects the prosperity of daxu at that time.

The pleasure of visiting the ancient town of Daxu lies in walking along the narrow blue stone road. The houses on both sides are made of black brick and gray ceramic tile. The styles are Ming Dynasty (1368-1644 A.D.) and Qing Dynasty (1644-1911 A.D.), reflecting the historical changes of the past few years. Walking along the old street, you will feel that you are back in the past. Those ancient buildings are telling you fascinating stories. There are also old bamboo weaving and shoe-making workshops and old barbershops. Here, the old people will get together to chat and drink tea, or sit at the door reading a book. You will find that the villagers live a slow and carefree life with a gentle and contented smile on their faces. Friendly residents may invite you to visit their houses so that you can have a close look at these buildings.

There is one thing you can’t miss in Daxu ancient town, which is Wanshou Bridge located at the junction of Ma River and Lijiang River. This stone arch bridge was built in Qing Dynasty and now has a smooth and shiny surface. This is an ideal place to enjoy the scenery of Lijiang River and the mountains on the other side of the river. Walking among them, you may find more than a dozen docks and a wooden mosque where religious activities are held.

In 2001, a group of ancient tombs were discovered in Daxu ancient town. The seven tombs are arranged in a plow shape, which is the first such example in China. The relationship between tombs and stars is not clear, but the cultural relics found in tombs have great research value. If time permits, you can also take a ferry to Maozhou Island, where you can pick fresh strawberries and eat local dishes on the farm.

Take special buses bound for Crown Cave (Guanyan) and get off at the Daxu Town Station. Buses are available at Guilin Chief Station and it usually takes around 45 minutes.