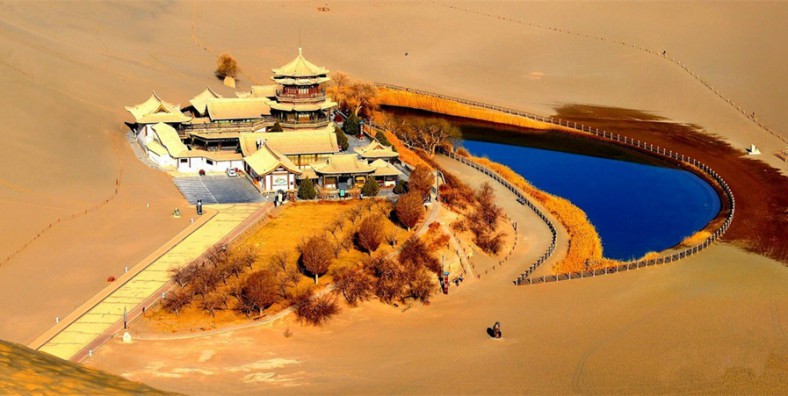 Yueyaquan (Chinese: 月牙泉; pinyin: Yuèyá Quán) is a crescent-shaped lake in an oasis, 6 km south of the city of Dunhuang in Gansu Province, China.

Crescent Lake was a place of interest as early as Tang Dynasty. On the south bank of the lake there are groups of ancient buildings where the main houses have more than 100 statue sculptures and hundreds of frescos. In Han Dynasty, Emperor Wu of Han put a stone named “Han Wo Wa Chi”, burnishing the legendary of the scenic spot.

According to legend that Xuanzang who traveled to the West to obtain sacred texts, passed through Dunhuang. When toiling across the desert, the white dragon horse was dead and Xuanzang was also on the verge of breaking down from the arduous environment without water and food. At this time, Guanyin caught it in the eyes and drop a drop of golden water from her golden water bottle to give Xuanzang a helping hand. The sacred water became a crescent-shaped lake. Xuanzang was saved and continued his journey to the West and the lake was left behind till today. Inside the water, there is a sort of plant called “Qi Xing Cao (Seven Star Herb)” that can cure all diseases.
Ticket Price: RMB 120
Opening Time: 06:00-20:00