Chongqing, Yichang and  Shanghai are the main port cities along the Yangtze River, where travelers can start their wonderful Yangtze Cruise tours. Among all, Chongqing Port(Chaotianmen Port) and Yichang Ports(including New Century Port, Taohuacun Port and Maoping Port) are comparatively more frequently used for the upstream and downstream Yangtze River cruise between Chongqing and Yichang.

Cruise routes between Chongqing and Yichang is know as a gold line of navigation. It’s the best scenic part of the Yangtze River, its shinning beauties keep attracting the eye sights from every corner of the world. Mountains, gorges, hills, plains, with changing scenes on different geographic shape, like a painted corridor filled with historic legends, should give you a marvelous experience. 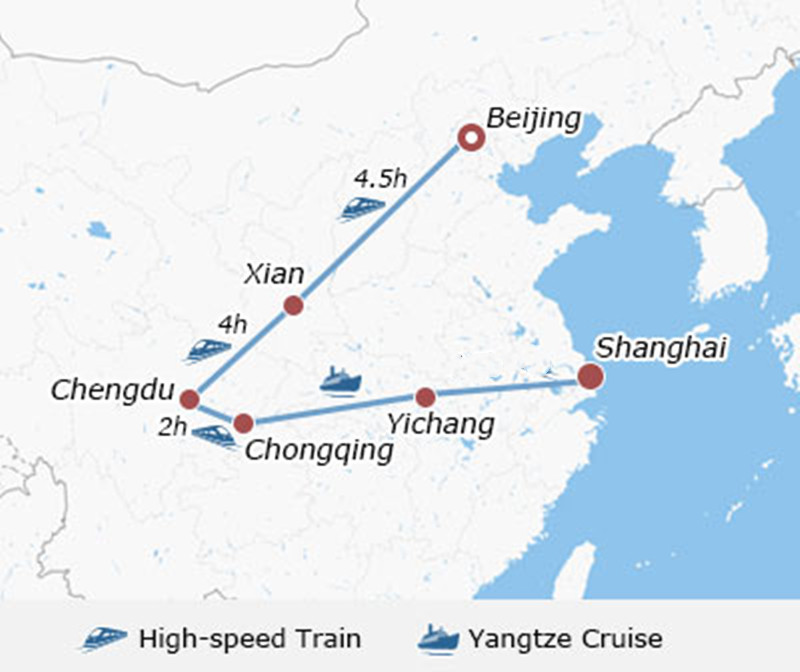 Cruise Routes Between Chongqing and Shanghai bring travelers on an intriguing journey, enable leisurely thorough sightseeing along Yangtze River and Three Gorges. The longest Yangtze Cruise Route (about 2644 kilometers) between Chongqing and Shanghai is the most relaxing cruising, The ship-Century Sky, running this route, will stop over at Taizhou, Manjing, Chizhou, Mount Jiuhua, Jingzhou, Wuhan cities and Jingdezhen, etc. to offer great time for the best appreciation of the essences in those nice tourist icon places, where you can get a better understanding about culture and history along the Yangtze River.

Yangtze Cruise Routes between Shanghai and Wuhan are the best routes to enjoy the attractions along Yangtze River. Take a Yangtze Cruise Tour between Wuhan and Shanghai and you can enjoy the natural, cultural and historical changes and highlights of the middle and lower reaches along Yangtze River. During the cruise tour, you can enjoy the prosperous Shanghai with many skyscrapers. Of course, you can choose the suitable shore excursions to enjoy the beautiful West Lake, some famous attractions in Nanjing, and well-known Jiuhua Mountain, etc. where you can experience the historical culture, natural attractions and local customs.

Yangtze River Cruise Routes between Shanghai and Wuhan is one of the Best Tourist Attractions and Top Things to Do when you travel to China, it introduces the main...

angtze River Cruise Routes Between Chongqing and Shanghai is one of the Best Tourist Attractions and Top Things to Do when you travel to China, it introduces the main...

Yangtze River Cruise Routes Between Chongqing and Yichang is one of the Best Tourist Attractions and Top Things to Do when you travel to China, it introduces the main...