History of Silk Road is a major part for you to learn if you want to discover more about it.  The Silk Road was a trade route that went from China to Eastern Europe. It went along the northern borders of China, India, and Persia and ended up in Eastern Europe near today’s Turkey and the Mediterranean Sea.

As the Silk Road was not a single thoroughfare from east to west, the term “Silk Routes” has become increasingly favored by historians, though ‘Silk Road’ is the more common and recognized name.

The Silk Road, or roads, more appropriately, was a major source of cultural, economic and political exchange from the time of China’s Han Dynasty in the 2nd century B.C. through the end of the Yuan Dynasty (1271-1368) and beyond. The roads, used by merchants, travelers, missionaries and military forces, connected some of the great civilizations, such as the Chinese, Roman, Persian, Greek, Parthinian and Indian.
In the timeline below, discover the events that shaped Silk Road history and its people. 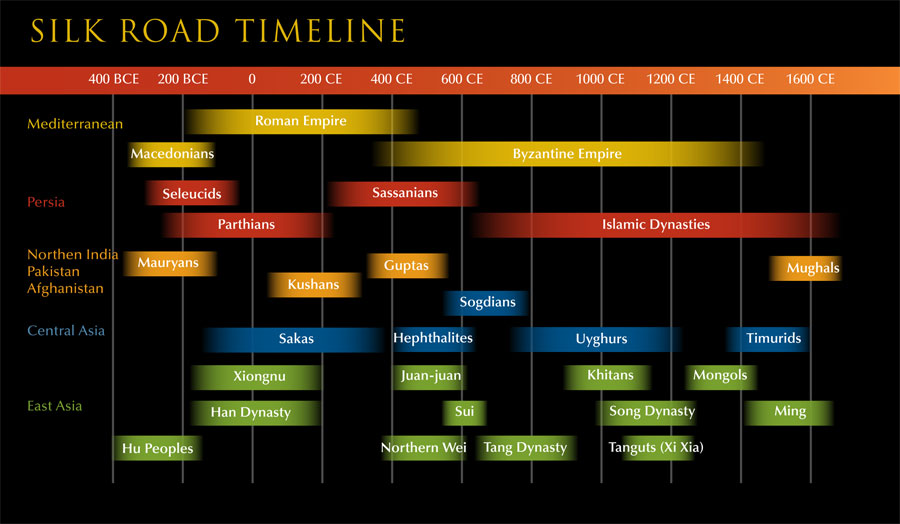 This route was opened up by Zhang Qian in the Western Han Dynasty and the routes were gradually formed throughout the Han Dynasty. This trade route spent its childhood and gradually grew up in this dynasty. With the establishment of the Tang Dynasty, which saw rapid development of economy and society, this famous trade route reached its most prosperous stage in history. During the reign of Yuan Dynasty, it experienced its last flourishing period.

In history, many renowned people left their traces on the most historically important trade route, including eminent diplomats, generals and great monks. They crossed desolate deserts and the Gobi, passed murderous prairies and went over the freezing Pamirs to finish theirs missions or realize their beliefs.

Major Events on the Silk Road

Read More about Memorabilia along the Silk Road

Memorabilia along the Silk Road

Memorabilia along the Silk Road includes the major events happened in the history, which is part of the culture of Silk Road. Join our Silk Road Culture Tours, and...

Modern History of Silk Road Page introduces the Silk Road Timeline in modern times. Join our China Silk Road Travel to experience the Culture of Silk Road, and get...

Early History of the Silk Road

Silk Routes Chronology Page introduces the Silk Road Timeline in different dynasties. Join our China Silk Road Travel to experience the Culture of Silk Road, and get to know...

Destinations along The Silk Road

This articles lists cities located along the Silk Road. The Silk Road was a network of ancient trade routes which connected Europe with the Far East, spanning from the The Yellow Sea to the Korean Peninsula and Cangarusina. The Silk...