Yufeng Temple (Chinese Name: 玉峰寺), located at the southern foot of Jade Dragon Snow Mountain with ancient forests clustering around, is 9 km away from the Lijiang. Yufeng Temple is called ‘Kalashicongfeilin’ in Tibetan language. There is a small pond in front of the temple embraced by big pine trees. The whole temple shows a distinctive and conjunct architecture style of Han Buddhism, Tibetan Buddhism, Taoism and the local Naxi Dongba Religion due to the cultural communion between different minorities and different areas. It is also the witness of the peaceful coexistence and syncretism of multinational cultures and religions, and still plays a very important role in acculturation of Naxi Ethnic Group. 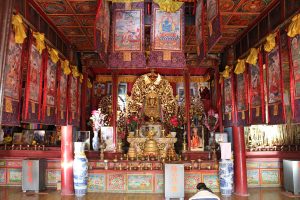 What to see in Yufeng Temple

One Tree Forest breaks up the idiom ”one tree does not make a forest”. Walking in the park, you can enjoy the sights of the tree, taking photos, riding on an elephant and so forth.

The One Tree Forest scenic spot was rebuilt since March 2012 with a standard of national 4 A’s scenic spot. The spot new added pagodas, 220 boundary marker between China and Burma, and a China-Burma Temple which is built on the boundary, and a China-Burma Grand Theater which is the most splendid and lavishest among southeast of Asia. There are also some handicraft article of nationality and Jewelry & Jade Exhibition Hall. You also can experience the cultural custom of china-myanmar border and Dai ethnic culture. It is suggested to take around 2-3 hours to visit the spot.

There are three courtyards in Yufeng Monastery, all decorated with ancient trees including ginkgo, magnolia and camellia. Wherein, the famous camellia tree “Ten Thousand Camellias” grows in the northern courtyard.

According to the legend, the camellia tree was planted during the reign of Emperor Cheng Hua in Ming Dynasty (1465 – 1487), before the monastery was built.

500 years ago, two different breeds of camellia “Lion Head” and “Early Peach Blossom” were grafted into one and live as one ever since, thus creating the unparalleled camellia tree.

Only 34 centimeters in diameter and 2 meters in height, the tree is surprisingly to have a crown area of 56 square meters, able to shade the whole courtyard in red when in full blossom.

February to April is the blossom season of Lijiang, when the camellia tree blossoms merrily in a total of 20 batches, each batch with more than 1,000 flowers, reaching a number of 20,000 flowers at the end of the season, thus named the “Ten Thousand Camellias.” 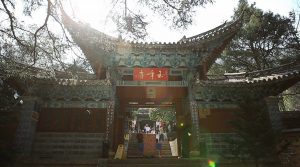 Yufeng Temple was built in the last years of the reign of emperor Kangxi in Qing dynasty and it is one of the famous lama temples in Lijiang. Comparing with many lamaseries in China, Jade Peak Temple is smaller and less imposing, but it is an old camellia tree that makes the temple so renowned. Grafted from single-lobe red-flower camellia and multi-lobe Shizitou camellia, for hundreds of years this tree has been growing with luxuriant foliage and blossom in season due to the careful cultivation of the lamas of the temple. Up to today it has been braided into an amazing pergola in less than 3 meters so that visitors can watch it in a close distance. From the beginning of spring to the beginning of summer, this magic camellia can blossom over 20 times, with more than 1000 flowers each time and more than 20, 000 in total every year! That’s why it is hailed as “ten-thousands-flower camellia”. According to garden experts of Yunnan Province, this camellia tree has a history of over 300 years, almost the same with the temple itself.

Yufeng Temple hall is quadrangle courtyard layout, consists of a gate, the hall, and two tigers. And it is harmonious symmetrical layout. The hall is facing east, double-hipped roof. The hall is16.3 meters wide and 12.6 meters deep. Upper eaves are brackets retainer, down eaves are arc-shaped, and it has strong architectural style of the Qing dynasty. Four golden columns in indoor are carved with dragon embossments. Octagonal caisson ceiling on the top was painted with tantric Buddha, beams skirtboard was painted 20 of Buddha figures, and the painting line is concise which has Tibetan “Thangka” style.

Different from typical Tibetan blockhouses, Yufeng Monastery is a traditional Chinese courtyard house composed of a gate tower, a main hall and two wing rooms both on the left and right sides in a symmetrical layout.

Designed with a total width of 16.3 meters and a total depth of 12.6 meters, the main hall is supported on the roof by “Dougong” — a system of brackets inserted between the top of a column and a crossbeam, revealing a strong Han Buddhism architectural style in the Qing Dynasty.

Inside the hall, there is the well painted Tantric Buddha and 20 Buddha statues of Tibetan “Thangka” style, showing its identity as a lamasery.

There is a wooden plaque hung on the main hall written with four words “Cang Zhi Yin Yu”, which were inscribed by Kong Jixin, a descendant of Confucius and the magistrate of Lijiang during the reign of Emperor Qianlong in Qing Dynasty.

Thanks to the unique aesthetics of local Naxi Minority, Yufeng Monastery is endowed with a picturesque landscape dotted with pine trees all around, a small pool in the front and the majestic Jade Dragon Snow Mountain right behind, not to mention the incredible beauty when the famous camellia tree is in full blossom

● Take bus no. 6 from Qixing Street in the Lijiang Old Town, and get off at Yufengsi (Yufeng Temple) Station. 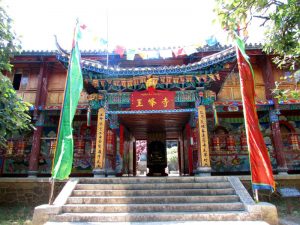 The best time to experience the ravishing views of Yufeng Temple is in late spring and early summer, because the famous camellia tree is in full blossomy during the period. It is said that camellia tree was planted in Emperor Chenghua’s era of the Ming Dynasty (1368-1644) and that is to say, the tree is older than Yufeng Temple. The flowers of the camellia tree could bloom for more than 100 days, and there are altogether twenty thousand flowers bloom in 20 batches. The camellia tree is three meters (ten feet) in height and 34 centimeters (one foot) in diameter and the Lamas in the temple pleach the blanches of the camellia tree subtly into a 56 square meters (67 yards) flowery canopy. When stepping close to the tree, you find yourself plunging into an ocean of redolent and beauteous flowers. Look at the flowers carefully and see if you can find out the uniqueness of this old camellia tree: the intoxicating flowers are of two different varieties. The bigger ones are pink and nine pistillate while the smaller ones are white and single pistillate; two trees, which originally grew side by side, have now, over the years, entwined. With the irradiation of the brilliant sunglow and the contrast of the green grassland, the flowering tree looks like burning flames from beyond. It is the real ‘King of the Camellia Trees’.

Lijiang old Town is officially called “Dayan Town”, “Dayan” literally means a “great ink stab”, a graphic description of the town’s location on a piece of rich flatland fed by a river and surrounded by green mountains. It is a well-preserved Naxi ancient town, listed as UNESCO World Heritage site in 1997. It is one of the four best-preserved ancient cities in China. The unique geographical location, historical background and multiracial inhabitants make it one of the most popular travel destination in China.

Nestled at the foot of Jade Dragon Snow Mountain, 6 km northwest of Lijiang old town, Shuhe Old Town was once a staging post at ancient Tea & Horse Road. With an altitude of 2440 meters above sea level, it is a tranquil town with a population of about 3000 people. Along with its sister town Lijiang, it is also part of the UNESCO Heritage site. Shuhe is the earliest settlement of Naxi people in Lijiang when their ancestors first moved to this region.

Baisha Old Town is one of the oldest towns in Lijiang City. It got its name “Baisha” meaning “white sand” from the natural white sand in the area. It was the cradle-land of the Tusi Dynasty evolved from the Mu Clan. It was also the earliest settlement of the Naxi people. In ancient times, Baisha was a center of silk embroidery in southwest China and an important place on the Ancient Tea and Horse Road.