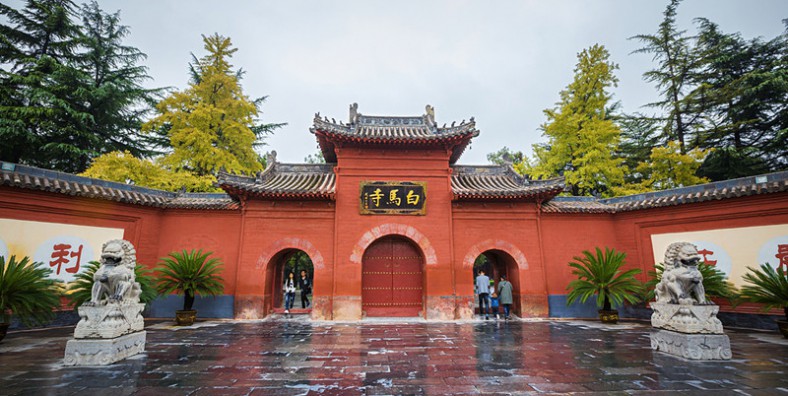 Why is White Horse Temple So Special?

The temple was founded in AD 68 during the Eastern Han Dynasty, with a history of thousands of history. It is the first Buddhist temple in China after Buddhism was introduced into China, as well as a famous Buddhist Temple in the world. It is honored as ‘the Cradle of Buddhism in China’.

Where is White Horse Temple?

The White Horse Temple is located 12 kilometers away from the east of Luoyang City, Henan Province. Address in English:  No. 6 Luoyang road, Luolong district, Luoyang, China. Address in Chinese:河南省洛阳市洛龙区白马寺镇洛白路6号.  The temple is about 115 km from Zhengzhou City (郑州市), the capital of Henan province (河南省).

If you want to get rid of hustle of transportation and troublesome navigation, you can book a private tour package which covers visiting, dining and transfer from us. Our local tour guide and driver will escort you to White Horse Temple with speed and convenience, and take care of all the details. You just need to focus on travel.

According to historical legend, Emperor Mingdi of the Eastern Han Dynasty dreamed of a golden man flying above the courtyard. After he woke up, he was delighted and sent envoys to western regions to invite Buddha and learn Buddhism. The two envoys underwent much hardship and met two eminent Indian dignitaries- She Moteng (摄摩腾) and Zhu Falan(竺法兰). Under their invitation, the two monks came to China with them and a white horse carrying the sutras together. In the year of AD 68, the emperor ordered to build a temple to keep the scriptures. In order to memorize the white horse for its carrying back of the sutras, the temple was named the White Horse Temple.

This hall was originally built in the Yuan Dynasty. In the middle of the hall sits a laughing Buddha – Maitreya. It is said that the Buddha was once incarnated as a beggar monk with a purse, which actually contained all the treasures of the world. The shrine is made of wood with over 50 vivid dragons carved into it and is truly a remarkable example of Qing Dynasty (1644-1911) culture. On either side of Maitreya stand the four majestic ‘Celestial Kings’. Each holds a different weapon and all four are clay sculptures moulded during the Qing Dynasty.

With 22.8 meters long and 14.2 meters wide, it’s the biggest hall here. Among the thousands Buddha statues, the Sakyamuni, Amitabha, the Medicine Buddha and the eighteen arhats standing around are all made from silk and hemp, which are most precious. The three saints Sakyamuni, Amitabha and the Buddha of Medicine look jovial with the eighteen arhats standing around and all are made from silk and hemp. Each one weighs only three to five kilograms (about seven to eleven pounds). The colors on these statues are still as fresh today as when they were first produced during the Yuan Dynasty. They are priceless treasures of the nation.

It is the smallest hall in White Horse Temple. The Hall of Guidance has deified statues of three Western Paradise saints. Amitabha is at the center and is flanked by the Goddess of Mercy on the left and the Bodhisattva of Moonlight on the right. According to Buddhism, when a Buddhist reaches a certain level with certain achievements, Amitabha Buddha guides them to the Western Paradise.