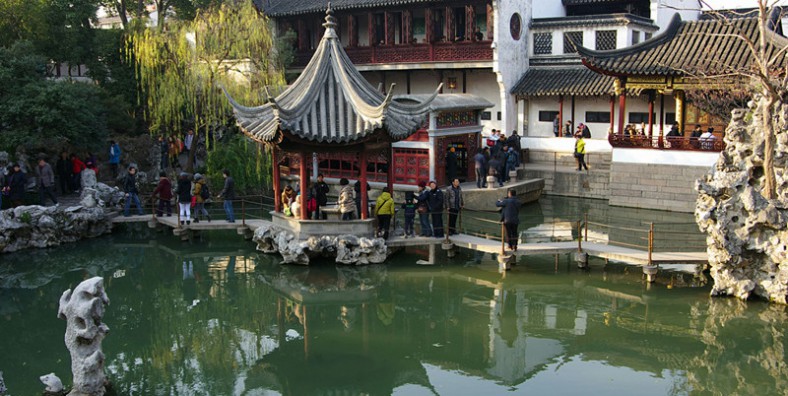 The combination of traditional gardening techniques and Buddhist thoughts makes it a temple garden that integrates Zen philosophy and garden pleasure.

Why is Lion Grove Garden So Special?

Shizi Forest was founded in the Yuan Dynasty to the second year of Zhengyi (1342) and is one of the representatives of Chinese classical private gardens. It belongs to one of the four famous gardens in Suzhou. Shizi Forest is also a world cultural heritage, a national key cultural relic protection unit and a national AAAA tourist attraction.

Where is Lion Grove Garden

Lion Grove Garden (Shizilin) is located on 23 Yuanlin Road, in the northeast of Suzhou – a city with profound cultural background and convenient developmental advantages. It is one of the four most famous and representative gardens of ancient classical style in Suzhou City.

Lion Grove Garden was built in 1342 of the Yuan Dynasty (1271-1368) by a group of Zen disciples of Tian Ru Monk as a memorial to their master, Monk Zhongfeng. Later, it changed hands and was renamed many times. Monk Tian Ru once studied the Buddhist classics of Shiya in Xitianmu Mountain, Zhejiang Province under the guidance of Monk Zhongfeng. There are also many strange stones shaped like lions in the garden, so the garden was originally named Lion Grove Garden. At that time, the garden was a popular center for scholars and Buddhists to hold activities. Many paintings and poems are inspired by it. Later, its name was changed to Bodhi Hall (Puti Zong Zheng) and Saint Eun Temple.

After Monk Tianru’s death and the disbandment of the disciples, Lion Grove Garden grew more dilapidated day by day. In 1589 of the Ming Dynasty (1368-1644), Monk Mingxing asked for donatives to rebuild the garden and temple, which were separated later during the reign of Emperor Kangxi in the Qing Dynasty (1644-1911). Huang Xingzu, the governor of Hengzhou, bought the garden and renamed it She Garden. His son, Huang Xi repaired and decorated the garden and gave it a new name – Five-Pine Garden in 1771. Good times don’t last long – Lion Grove was again left to ruin due to Huang’s downfall and purchased by Bei family in 1917. After 1949, the garden entered a steady and well-protected period.

The flower basket hall is built with water on the surface and has a platform in front. There are 14 long landing windows in the south of the hall, each engraved with a Tang poem, and 6 long windows in the north of the hall all engraved with stories of landscape characters. The steps in the hall do not fall to the ground, and the ends of the pillars are carved into basket shapes and plum, orchid, bamboo and chrysanthemum.

The sleeping cloud room is a meditation room where monks rest. It has a convex shape, with two layers and six top and bottom corners respectively. It has a peculiar shape and is the only “room” in Suzhou gardens. The space around the pavilion is extremely narrow, as if it were in a mountain depression with heavy rock walls. “lying on the cloud” comes from yuan haowen’s poem “when to lie on the cloud, because of the festival, you are lazy.”

The whole structure of Lion Grove Garden shows a flavor of Zen Buddhism and is an apotheosis of the gardens’ constructions. A part of the Imperial Summer Resort of the Qing Dynasty in Chengde of Hebei Province was a mimic of this garden. The garden occupies a very important place in history, representing the diversity of cultural and architectural development in Suzhou over the years.

March-April and September-October are the best travel times in Lion Grove Garden.