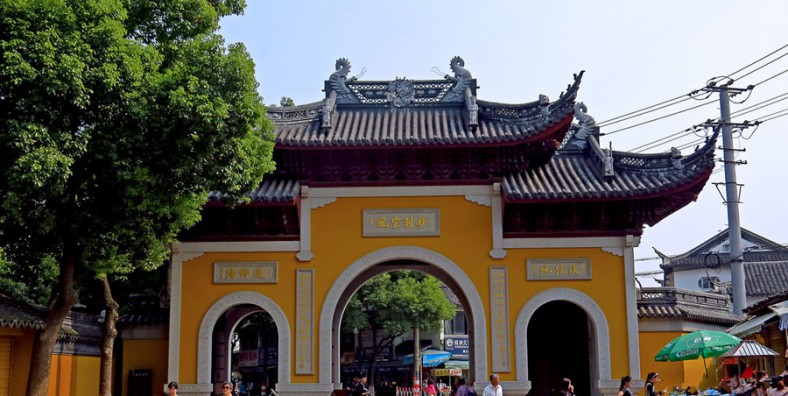 There are many more historical relics in the temple, such as the statue of Han Shan, the stone tablet inscription of the poem A Night Mooring Near Maple Bridge.

Why is Hanshan Temple So Special?

Hanshan temple is famous for a famous poem written by Tang dynasty poet Zhang Ji when he passed Hanshan temple in a boat. This poem describes the melancholy scene of a depressed traveler who berths in Qiao Feng at night and hears the bell of Hanshan Temple. This poem is still very popular in China, Japan and South Korea. It is part of the primary school curriculum in China and Japan.

Where is Hanshan Temple

Hanshan Temple, located in Fengqiao Town (Qiao Feng) in the western suburb of Suzhou, was once one of the ten famous temples in China. Hanshan temple, also called Hanshan temple, is located in Suzhou city. it was built in 502 by two famous eminent monks.

It is said that in the Tang Dynasty, a famous monk Han Shan took charge of the temple, hence the name. The temple was first built in Liang Dynasty (502-557) and has been repaired several times in subsequent dynasties. Now, it covers about three acres (about 10,600 square meters), showing the architectural style of the Qing Dynasty (1644-1911). It includes the big prayer hall, the sutra depository, the bell tower, the Fengjiang pavilion and the stone corridor. In 1995, a 138-foot (about 42-meter) high five-story Buddhist pagoda was built, named Puming Pagoda, which later became a symbolic building of the temple. There are also more historical relics in the temple, such as Han Shan statues, inscriptions of the poem “Night Mooring Near Fengqiao” and other inscriptions written by famous intellectuals in ancient China.

Han Shan Temple is one of the most famous temples in Chinese history. It often boasts of its bell. However, the most famous clock described in Zhang Ji’s poems disappeared a long time ago. Now the clock in the tower is modeled on the one before 1904. Every New Year’s Eve, the bell rings 108 times to pray for happiness and safety in the coming year. After the ceremony, tourists can write down their New Year’s resolutions on the prayer wall and enjoy a wonderful performance. This festival attracts thousands of tourists from home and abroad.

The Statue of the  Sakyamuni

Hanshan Temple is also a Buddhist temple. The statue of Buddha Sakyamuni is offered for worship in the Great Prayer Hall. In the Red Hair Hall, there are bronze statues of three eminent monks: Xuan Zang (Tang Dynasty monk and translator), Jian Zhen (Tang Dynasty monk who went to Japan to preach) and Konghai. Konghai is a Japanese monk who studied Buddhism in China in the 9th century. When he was in China, he visited Hanshan Temple. After returning to Japan, he began to preach in his own country. Until now, temples are one of the most important places to hold Buddhist activities.

Around the temple, you can also enjoy the beautiful scenery of the Maple Bridge, where Zhang Ji’s boat was once moored, and get a realistic feel of the ordinary life of the people living in the Fengqiao Old Town. You can also have a look at the famous Jinghang Grand Canal, which is the longest ancient man-made canal in the world.

As a great cultural landmark in Suzhou, it has not only exerted great influence on festival activities and the beliefs of the local people, but also attracted millions of tourists to come and worship. Every year on December 31, Hanshan temple will hold a new year’s bell ringing activity. during this period, the superior of Hanshan temple will ring 108 bells. tourists can enjoy all kinds of celebration activities.

March-April and September-October are the best travel times in Hanshan Temple.

On New Year’s Eve, there will be a grand “bell-ringing” ceremony in the temple. The activity starts at 18:00 on December 31 and ends at 01:00 on January 1 of the following year. In the activity, many entertainment programs related to Buddhism are performed, and tourists can ring the bell after the ceremony.