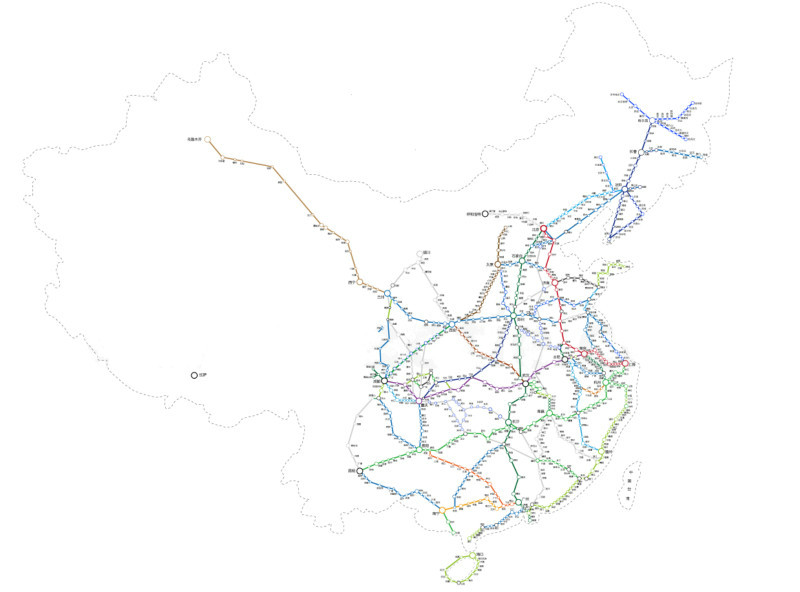 The grid consists of eight high-speed railways, of which four runs north-south and four east-west, with a total length of 12,000 km. Most of the routes follow the existing trunk lines, but along the southeastern coastal corridor, new ones have been built to connect the cities that were previously connected by railways. High-speed trains in high-speed corridors can usually reach 300-350 kilometers per hour (190-220 miles per hour). On mixed-use high-speed rail lines, passenger train can reach a maximum speed of 200-250 km/h (120-160 miles/h).

Bengbu-Hefei and Nanjing-Hangzhou passenger line are also included in the Beijing-Shanghai Passageway.

8+8 HSR grid is a high-speed railway network supplemented by intercity railway, mainly consisting of the “eight vertical” corridors in coastal areas, Beijing and Shanghai, as well as the “eight horizontal” corridors in land bridges and along rivers. It can realize 1-4 hour traffic circle between adjacent large and medium-sized cities and 0.5-2 hour traffic circle within city clusters.

According to the Medium and Long Term Railway Network Planning (revised in 2008), the Ministry of Railways plans to build more than 40,000 kilometers (25,000 miles) of Railways to expand the Western Railway Network and fill the gaps in the eastern and central railway networks. Some of these new railways are under construction to accommodate passengers and cargo at speeds of 200-250 km/h (120-160 miles/h). These railways are also considered high-speed railways, although they are not part of the national high-speed rail grid or the inter-city high-speed railway. According to the revised plan and construction in 2008, several high-speed railway lines have been incorporated into the 8+8 national grid.

Other Newly-built or Upgraded Railways