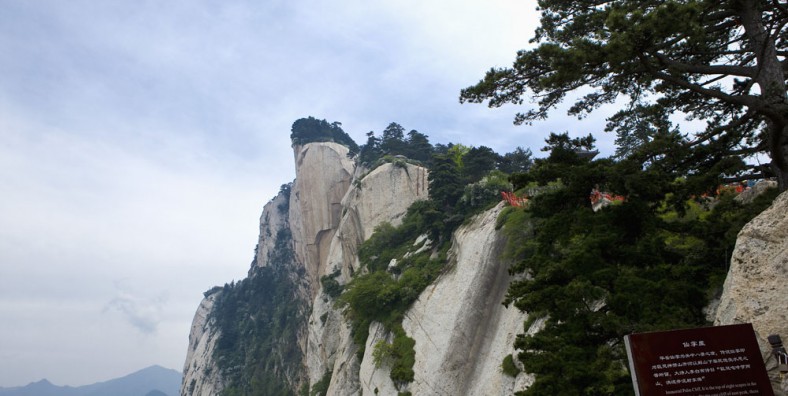 Mount Hua, one of the five sacred mountains of China, can be found here. Mount Hua has unusual scenery and the road up the mountain is steep. There are also ancient sites which have had a great influence on Taoist culture, such as Yuquan Temple and the Weichangcheng ruins.

Why is Mount Huashan So Special？

Situated in Huayin County, Mt. Huashan is some 120 kilometers (about 75 miles) east of Xian City in Shaanxi Province. This mountain is celebrated for its majestic breath-taking crags, steep paths, beautiful scenery and it is said to be the most precipitous mountain in the world. Mt. Huashan is huge complete granite. Its history can be traced back 120 million years before.

Mt. Huashan is known as “The Number One Precipitous Mountain under Heaven” (天下第一险). The mountain is one of China Five Sacred Taoist Mountains, and has a long history of religious significance. The mountain has five main peaks, of which the tallest is the South Peak at 2160 m. This peak also had a well-deserved reputation as having the World most dangerous hiking trail.

It is a common saying that “Mt. Huashan has only one path since ancient times”. Only one narrow and zigzag path, 15 kilometers long and stretching from south to north, is available in Mt. Huashan.

There are mainly five peaks of Mount Huashan.

It is 2096.2 m bove the sea level, as one of the main peaks of Mount Huashua, seated at east. There is a platform on the summit of the peak, where is a good place to see the sunrise, with wild field of vision. People name the terrace “Chaoyang Terrace” or “Facing Sun Terrace”, and the East Peaks was name Chaoyang Peak, or Facing Sun Peak.

The altitude of South Peak is 2154.9 meters. It is also the highest peak among all the Five Mountains. On the south peak there are Laozi peak, Chinese alchemy and eight-trigram pool, these sites are associated with the legend of Lao tzu. And there is “heavenly southern gate” in the cliff to the east. On the south peak also there is the golden temple built in the Ming dynasty, also known as the Baidi temple to worship Mount Huashan god.

It seated at west with an altitude of 2082m. As the giant rock on the peak looks like petals of lotus, ancient literati also called it Lotus Peak and Furong Peak.

It is 1614.9 meters high above the sea leave. The North Peak is solitary and imposing to the sky. As there is a Ruoyun Terrace, it is also name Cloud Terrace Peak. Located at the north part of Mt. Huashan, the North Peak has White Cloud Peak at north, Liangzhang Hill at east, approaches East Peak, South Peak and West Peak and connects with Thousand-Foot Precipice, Hundred-Foot Crevice and Laojun Plough Ditch. The summit is joint by several groups of rocks. On the tiptop, there is a terrace, Yiyun Pavilion, which is a great place to see the other 3 main peaks and Black Dragon Ridge.

The peak is 2037.8 m high above the sea level. It is a small peak at west side of the East Peak. In ancient time, it was a part of East Peak, but now, people rank it as one of the main peak of Mt. Huashan. Heavenly Stairs in the north of Middle Peak, and was built in 1984, is the shortcut from the Yinfeng pavilion to the East Peak via East Stone Building, and has become a new risk Mt. Huashan road. Heavenly Stairs are more than 10 meters high, vertical to the ground in an angle of 90 degrees, protruding in the upper cliff. Three ladders are suspended for visitors to climb in line, and because the body can’t get close to the walls, with the rope swing it is easy to shake, making people feel like sailing clouds and fogs in the heaven therefore it is called Heavenly Stairs.

Traditional route: First day, enter from Huashan Gate at 9 o’clock, passing Qianchichuang, Baichi Valley.
The second day, climb to the Chaoyang Platform on East Peak to watch the sunrise. And then from East Peak to Yaozifanshen, Xiaqi Pavilion, and to the other side of East Peak. Hiking to South Peak, and passing South Gate to see the Sky Plank. Back from the Sky plank and walk down South Peak to West Peak. And then, from West Peak to Middle Peak, climb down. On the way, you will see many spots. At about 4 o’clock in the afternoon, you will back to Huashan Gate.

How to get to Mount Huashan in Huayin City, Shaanxi

If you want to get out of the traffic and hassle of navigation, you can book a private tour package that includes visiting, dining and transfer from us. Our local guide and driver will escort you to the Mount Huashan in Huayin County in the fastest and most convenient way and take care of all the details. You just have to focus on the visiting.

One thought on “Mount Huashan in Huayin City, Shaanxi”